Lori and Edmond Côté have been farming together for more than 35 years, but it’s been generations since Edmond’s grandparents immigrated in the early 1900s to the St. Paul, Alta., area and the land they still farm.

“We used to milk cows, but now we’re into beef cattle, horses, goats, pigs and chickens,” Lori said. “We have five kids that we’ve raised here and loved every minute of it.” 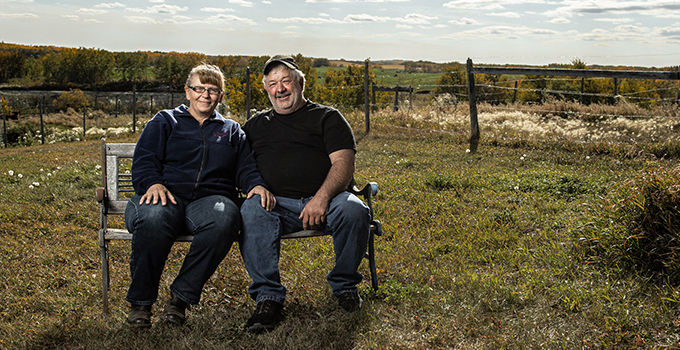 The family has been long-time Co-op members, so it was only natural for them to approach Cornerstone Co-op when they heard about a program connecting grocery stores with farmers to reduce food waste.

“As soon as I heard Co-op was looking at doing that, we talked to the right people and said we want to be on the list,” Lori said.

“Loop is a way to take food we can’t sell or don’t have a good use for in our community and instead of throwing it in the garbage, we make it available in a safe way to small family farms so we can produce more food locally,” said Jaime White, co-founder of Loop Resource.

The business started in 2014 when White approached Dawson Creek Co-op in British Columbia about diverting food waste from the landfill by using it on his family’s farm. Loop Resources was formed to help address the potential risks and regulations associated with food safety and animal nutrition.

Since that one store, the program has grown to 160 retail partners and 1,600 farms, with between one and two million kilograms of food waste being diverted from landfills every month across Western Canada.

“If we can take food that would otherwise create environmental damage in our community and turn it into a positive, that’s something I’m all about. It’s win-win, nobody loses in this.”

While Co-op tries to be as efficient as possible when ordering, food waste still occurs, so we take a multi-faceted approach.

“Right now, we work with a lot of local groups like food banks to help give back to the people that need it,” said Nathan Parsons, manager of the Cornerstone Co-op Food Store in Elk Point, Alta.

“For the first six months of 2020, we were able to donate six tons of product to those support groups. Anything that can’t be donated now goes through our Loop Program.”

As a part of a pilot program for the larger Co-operative Retailing System, Cornerstone Co-op connected three food stores to about 35 farmers, who pick up bruised fruit, vegetable cuttings, outdated sandwiches and more every week.

“Sustainability to us is being responsible with our financials, reducing the environmental waste we have on a daily basis, and supporting and investing in our communities,” Parsons said. “Loop gives us the ability to achieve all of that.”

The Côtés are noticing the benefits go beyond reducing food waste as well. Their feed costs have gone down, production has increased — their chickens lay more eggs and pigs have gained weight faster — and find their animals to be healthier and happier.

“I didn’t realize there was so much stuff that ended up in the landfill,” Lori said. “Seeing what we get now and being able to repurpose that in a good way is remarkable.”

The Loop Program is currently in place at 11 local Co-op associations across Western Canada, with an increasing number of Co-op locations participating. Speak to your local Co-op to see if they participate in Loop and visit www.loopresource.ca for more details.